Book Release: Fury of the Falcon

REP is pleased to announce the release of the fifth and final book of Court Ellyn's Falcons Saga, Fury of the Falcon.

The ebook is available at Amazon, and the print version will follow in about a week. 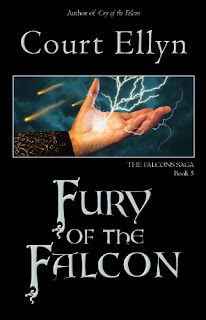 The fifth and final volume of the Falcons Saga brings this sweeping fantasy series to its stunning conclusion.

With Kelyn wounded in an attempt to barter for peace and Thorn recovering from his struggle against forces from the abyss, defeat and despair encroach. The human armies are stretched to their limit, and Lothiar’s horde relentlessly presses against their last stronghold.

Amid the carnage, Carah is determined to mend the wounds sundering her family and risks a journey across hundreds of miles of ogre-infested territory. When Lothiar’s schemes pay off and Carah finds herself in the dreaded pit, her brother Kethlyn proposes an all-or-nothing campaign deep behind enemy lines to rescue her.

As the War Commander and his desperate army prepare to make this final stand, events race toward a destiny no one expects. Either victory or defeat will usher in a new age…

Court Ellyn
A dreamer, a cynic, a klutz who loves cats, a homebody who roams, an artist, a writer. Strong coffee is the elixir that keeps the dragons at bay. My basement is full of them.
Newer Posts Older Posts Home
Subscribe to: Posts (Atom)